Members of the US Woman’s National Soccer Team are suing their governing body for gender discrimination regarding compensation levels they view as unfairly low, compared with their male counterparts.

In the every-day world of business, figures of between 18 and 22% are commonly bantered about as the pay differential between men and woman.

Assuming that all of the above is true, the question becomes, so what?

Men and woman aren’t properly measured in groups; we are all individuals, not interchangeable monolithic commodities.  If there is one defining factor unique about America, it is the importance of the individual over the concept of groups.

As for wage disparity, anyone can bargain for higher pay.  If athletes, or anyone else, feel they are under-paid, they are free to perform for another organization that agrees on their value and will pay more for it.  If folks can’t or won’t do that, their perceived value is less than the marketplace is willing to pay, and it is the marketplace that ultimately determines value.

Each of the 28 named plaintiffs are individuals.  Each of these individuals signed a contract agreeing to the salary and benefits package they are currently enjoying.  None of these woman are claiming they signed under duress, so what is the problem?  Signing that contract was undoubtedly one of the highlights of their careers, so what changed?

Perhaps it is jealously of the men’s ability to apparently better negotiate?  Maybe it is embarrassment for failing to be a good negotiators on their own behaves?  Could it be that the marketplace of consumers doesn’t value the woman’s program of soccer as highly as they do the men’s?

None of the 28 named plaintiffs would enjoy any notoriety if not for their membership and affiliation with the US Soccer Federation.  It is on this national platform from which they gained access to the wider world audience, a privilege afforded to them courtesy of the United State of American.  That world stage was created by each nation’s national governing body, culminating with the World Cup, sponsored by the international governing body of the sport, FIFA, (International Federation of Association Football.)

The 211 member nations governing bodies have built the international platform that the athletes stand upon.  Those nations own that space, the athlete’s job is to perform upon it, not use it as their own bully pulpit.  They are free to do that on their own time, their own dime, and to make perfectly clear, they are expressing their own opinions as individuals,  the terminally disgruntled Primadonna athlete with a chip on her shoulder, not as members of a national team that represents all of America.

Thanks ladies, for demonstrating the concept of the Ugly American while grossly over-celebrating the shellacking of Thailand, or carelessly dragging the US flag on the ground while hamming for the camera.

Before the girls get too excited about direct comparisons between male and female competition, let’s have a reality check on performances.  Let’s give credit where due, to the FC-Dallas, boy’s under 15 team who put a thumping to that same US Woman’s team back in 2017 in their preparation for international competition.

The US Soccer Federation has been in existence for over 100 years, and 4 years from now, when the next World Cup is played, today’s whining poor sports will be as unrecognizable as the 2015 team, not a single player from which 99% of fans can name.

The 2019 World Cup belongs to the United States of America.  Not a single athletes name is engraved on that trophy, not even the country; it simply says FIFA Woman’s World Cup and thank goodness for that.  No one wants to be associated with militant poor sports throwing the F-bomb in public comments.  Good grief these woman had many cheering for the Netherlands! 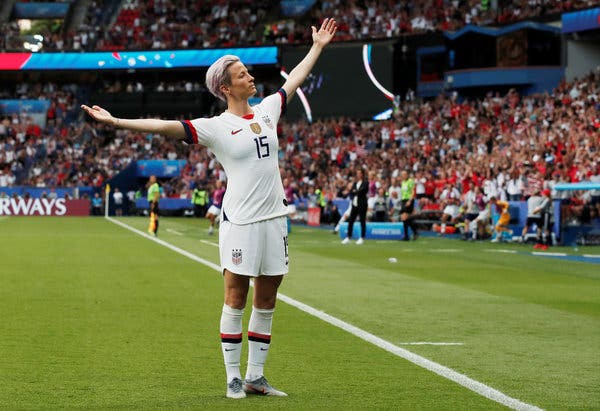 And on behalf of the millions of decent, hard-working proud American who play by the rules and enjoy a healthy rivalry, to the rest of the world watching this, I’m sorry; these women don’t accurately represent who we are.