Donald Trump had a habit of uttering the single word; “Wrong”, during the various debates when he heard something said with which he disagreed.  It is a word that every professional journalist, media pundit, talk show host and politician should repeat as they stand facing a mirror.  Everyone was wrong about Trump.  Moreover, today and I’m sure tomorrow, those same dead wrong prognosticators will continue to write and talk and lecture and babble about everything they have been proven not to know about Trump, as if they actually got it right.

Look carefully at the voting map of our country, red everywhere with blue edges.  Thank God and our founders for the concept of the Electoral College, which defends against the likelihood of the disenfranchisement of Middle America via the voting bloc of large urban areas like New York and Los Angeles.

The liberal agenda American has been suffering under since Lyndon Johnson has perhaps happily met its Waterloo.  Hillary Clinton was the final leg of the Obama legacy, now vanquished by the people.  Those millions of “deplorables”; bitter clingers clutching at their guns and their Bibles came out in force to address the insults head-on.  Clinton received some 6 million fewer votes than Obama in 2012.  The media machine reminded us of the shame all of the millions of non-college educated white men should feel, apparently so thoroughly stupid as to cast a vote for Trump, oh the humanity!  Nice try, but we all know that this is just liberal code for dumb rednecks, they just don’t have the guts to say it outright, political correctness and all that don’t you know.  What is deplorable is the condescension; the assumed moral authority and the soft bigotry of the low expectations of the “great unwashed” liberals so cavalierly embrace.

During the final debate, when Trump suggested he might not go quietly if he lost the election, the Left went crazy saying this in a October 19, 2016 article in Politico.  “Donald Trump delivered another unprecedented historical moment during the final presidential debate Wednesday night when the Republican nominee, who appears on his way to a landslide loss, refused to say that he would accept the election’s outcome.”  When we fast-forward to the present, we see rioting in major cities by the same leftists who were so quick to accuse those on the Right of acting out when Hillary was to be crowned as their first Queen.

So now, those on the Left call for calm, understanding and reconciliation, just as they would be doing had Clinton won, right?  Oh no, we don’t believe that anymore, too many examples of blown expectations.  Elections have consequences, picking winners and defeating losers.  Hillary Clinton is by definition a loser and as another famous queen was heard to say to her faithful followers just before her untimely demise, “Let them eat cake.” 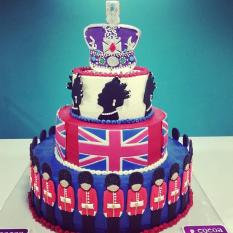